Better Bread-Making: No Need to Knead

Welcome back to the Better Bread-Making Series!

When most people think of bread-making, they think of the workout they’ll likely get from all the kneading. Some may find kneading a therapeutic process. I agree it can be at times. But what about the times that it feels more like a hassle than a pleasure? What If I told you kneading isn’t always necessary to making bread?

The Secret that Unlocked Bread Making for Me

Still, you might be like a lot of the people who tell me they aren’t up for the arm-aching dough kneading. No problem. This recipe, like many of my bread recipes, is a No-Knead dough.

It can seem like a big production to bake a couple of loaves at a time. Four hours is a lot of time to dedicate to baking something. Do you know it doesn’t take much more time to make more bread? Put it in the freezer, give a loaf to a friend or client.

In reality, bread-making is mostly waiting.

There’s not a lot you can do to change that. It usually goes like this:

Still, when you do the math, you’re typically only handling the dough for somewhere between 15-30 minutes. The rest is downtime. It turns bread into an all-day experience. Whether you set timers to track it, walk by obsessively, or wish for the best, the dough does its thing. Kind of like having a baby in the house.

But kneading? Apparently, this is optional.

Most of the bread recipes I had tried had a kneading step. Kneading, pressing, folding over and over for 8-10 minutes. Work that gluten, work those muscles. Bakers and massage therapists – that’s who you call to open the pickle jar.

This step appeared so often, I assumed that every single bread required that back-breaking work in order to get good bread. One of the very first artisan bread recipes I made on my own successfully was the master recipe from The New Artisan Artisan Bread in Five Minutes a Day by Jeff Hertzberg and Zoe Francois. It seemed to break a cardinal rule I found in most recipes. I didn’t have to knead it. No-knead bread? That was a game-changer.

This newfound recipe was low-maintenance, so obviously I needed to try it. It took such little effort to throw together, it almost seemed impossible that it would come out as actual bread, but it did, and it was great. I applied the same method to other breads to see if they too would work without considerable kneading. To my surprise, it worked for most recipes.

This is what unlocked the mystery of bread-making for me, and I haven’t looked back.

Pick up a copy of my book, Baking with The Bread Lady and find out how to put this magic to work with my best recipes.

Now you know the secret, too.

Want to read more about the Better Bread-Making Series? Click or tap the articles below to read the rest of the series!

Better Bread-Making: Get the Flavor You Crave

Beter-Bread-making: The Proof is in the Bloom

Written by: The Bread Lady

My name is Sarah Gonzalez a.k.a The Bread Lady. I`m a baker, chef, and all around creative. I love food, art and antiques. When I am not creating I am teaching others how to create through food.

Had such a fun time at the Galentine’s Afternoon 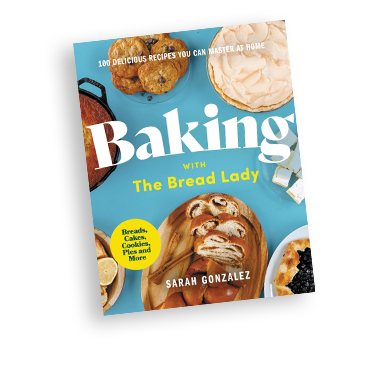